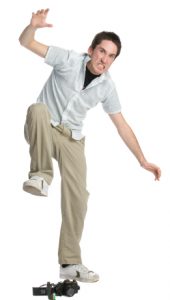 Guys on a dating site get mad because you may have been the one-hundredth girl who has just chosen not to reply to their message.

They may have been okay with a few girls not replying to their messages earlier on.

However, many guys send lots of messages to girls in the hopes that a small percentage of those girls will respond.

It can become incredibly frustrating to them when they have sent so many messages and they are yet to get replies from girls.

Hence, a lot of these guys get mad.

In essence, they reach a breaking point.

It is not so much that they are mad at you specifically.

It is more so that you may have been the one-hundredth girl that they have sent a message to and they are yet to get a reply from anyone.

They just reach a breaking point and feel the need to lash out.

When they get mad and send you an angry message, it is just out of frustration.

Again, it is typically not because they are mad at you specifically.

These are guys who were probably just fine with the first few girls not replying to their messages.

They weren’t mad at that point.

However, by the time they got to you, they may have already sent out a myriad of messages that didn’t get replies from girls.

As a result, they take out that frustration on you.

Guys on a dating site get mad when they don’t get replies from girls because they feel as though the girl is acting like she is better than them.

Hence, when they don’t get replies from girls, they may take that to mean that the girl couldn’t be bothered to reply.

This tends to hurt their sense of pride and they take it personally.

They don’t want to feel as though they are insignificant.

Hence, they may get mad and send you an angry message because they are trying to reclaim their pride.

They want to put you in your place.

In essence, they want you to understand that you aren’t better than them.

For guys who get mad for this reason, they want to always be in control.

They don’t like it when they are in a situation where they have no control.

By not getting replies from girls, they are in a situation where they simply have no control over how a girl behaves.

She has chosen not to reply to them and this tends to agitate their sense of control.

In order to regain that sense of control, they get mad and send you an angry message.

In doing this, they are able to try to influence your emotions in some way.

They hope that they get to rattle you or make you upset by the message that they send you. If you react emotionally to their angry message, they know that they have influenced your behavior in some way.

This makes them feel like they have regained some kind of control over the situation.

Guys on a dating site get mad when they don’t get replies from girls because they may already be upset with women in general.

They may have joined a dating site out of sheer frustration with their real life failures in finding love.

They may have been repeatedly rejected by girls in the real world. They may have thought that they would have much better luck on a dating site.

They may have thought that girls would respond to them differently on a dating site.

However, they are also getting rejected on a dating site.

When these guys get mad when they don’t get replies from girls on a dating site, it is typically a feeling that started in the real world.

They were already frustrated with all the failures that they have had with girls in the real world.

In the real world, they really couldn’t express their frustration.

They didn’t have the nerve to get mad to a girl’s face and start saying rude words or phrases to her.

However, on a dating site, they are able to get mad and send angry messages to the girls who don’t reply because they have the cover of cyberspace.

They can get as rude as they want on a dating site because they don’t have to face the girl in real life.

They can type as many angry messages to girls who don’t reply to their messages because they have a keypad and a screen between themselves and the girl.

It is a lot easier to type angry messages through cyberspace than to face a girl in real life and voice their anger.

When they get mad at you for not replying to their message, it is not often personal.

It often has to do with all of the build-up of frustration that they have experienced with romance and women, starting in the real world and leading into what they are now experiencing on a dating site.