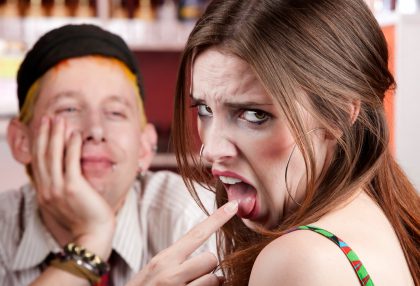 If he didn’t post honest pictures on his dating profile, he is the one that has put you in this position.

Understand and acknowledge this.

You should not feel obligated to find a nice way to say that he doesn’t look like the pictures on his dating profile.

Think about the time you spent chatting with this guy on the dating site.

Think about the time that you took out of your weekly schedule to meet him on that all important first date.

Now, think about the fact that after all of that, he shows up at the date looking different from what he represented himself to be on his dating profile.

He is the one who has neither been nice nor considerate in this situation.

He is the one who has disrespected your time and effort in misleading you into thinking that he looks exactly the same way in real life as he has represented himself to be on his dating profile pictures.

When you met him on that first date, you were obviously disappointed.

In order to be polite, there is a good chance that you hid this disappointment from him. You went ahead with the date anyway just to be civil.

However, do understand that at the moment that he showed up at that date looking substantially different from what he looks like in his dating profile pictures, you were well within your right to make him aware of his deception and leave the date without going through with it.

Online dating can be challenging enough.

The least a person can do is be honest about what they look like.

He wasn’t honest. Hence, he wasn’t being nice at all.

You don’t owe him a nice way to go about telling him that he doesn’t look like the pictures on his dating profile and as a result, you have no interest in going on further dates with him.

You should think about how precious your time and effort is.

He took advantage of that.

You have every right to be just as inconsiderate.

However, you are a nice person.

You don’t want to just leave this man without any explanation as to why you no longer want to go out on any further dates with him.

You don’t have to embellish your words.

In fact, it would work in your favor to be as clear as possible in what you are saying so that he has no doubt about what you are referring to.

This is really it.

The truth is, he already knows that he posted dishonest pictures on his dating profile.

He knows that he has gained more weight since those pictures were taken.

He knows that he used deceitful angles or poor lighting when it came to how he portrayed his face and body.

He knows that those photos are years old and he may not look as youthful today.

The moment you let him know that he doesn’t look like the pictures on his dating profile and that you no longer wish to go out on dates with him, he will get it.

This is most likely not the first time that he has been told this.

All he was hoping for was that he could trick you into giving him a chance in real life.

Perhaps he thought that his charm would be able to make up for the fact that he doesn’t look anywhere near as good in real life.

However, you are not going to make that mistake.