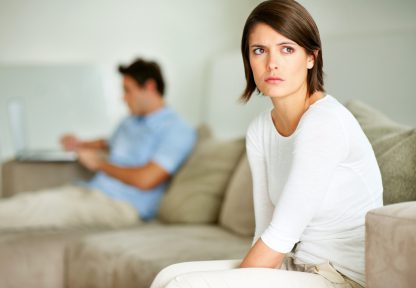 If you are trying to figure out what this guy that you met through online dating wants from you, it may be because he is not always consistent with his behavior.

Perhaps he has told you in the past that he would like to pursue a serious relationship with someone.

This may also be what you want and thereby why you started online dating.

He may have moments where he is energetic and asking you the right kind of questions in trying to get to know you better as a person.

However, there may be other moments where he just seems very non-communicative or moody.

You may find yourself having to carry the full weight of conversation in these moments to the point where you may get frustrated.

Perhaps you ask him why he is being so non-communicative and he is unwilling to tell you.

These kind of moments with this guy may have repeatedly led you to the point where you have even contemplated just ending your interaction with him entirely.

However, before you know it, the next conversation that you have with him is so much more lively and energetic.

He is upbeat again and asking you the right kind of questions.

You become relieved in these moments and decide to keep this interaction alive in the hopes that he will be consistent with being more engaged.

However, not too long after this, he is back to being non-communicative or moody again.

You are not alone in having this kind of experience with a person that you meet through online dating.

Oftentimes, people who join an online dating site may not be emotionally ready to date or get into a relationship with anyone.

They may have convinced themselves that they are, but they really aren’t.

Oftentimes, these are people who have a hard time getting into romantic relationships that last.

They may be relative loners or even introverts in the real world.

They are more comfortable with being on their own or in their own space.

However, they still convince themselves that they need human companionship after not having been in a relationship for some time.

As a result, they decide that they will start online dating.

You may happen to meet a person like this as you are browsing through online dating profiles or perhaps they send you a message.

Your interaction with the person is normally going to go really well at first.

You will feel a strong connection with them.

After a while, you may even get the sense that you have a really good idea about what they want from you.

Indeed, you may believe that the both of you want the same thing.

However, out of nowhere, the guy starts being non-communicative.

It starts feeling as though you are the only one who is keeping the correspondence alive and he is barely putting out any effort to do so.

This is so frustrating to you because this kind of behavior came out of nowhere.

Everything prior to this beginning to occur was so good.

You should understand that in scenarios like this, the problem does not often lie with you. It lies with the guy.

He doesn’t know what he wants.

He is used to his solitude and doesn’t know whether he is actually emotionally prepared to allow someone else to come into his life on an intimate and romantic level.

If he has continued exhibiting this kind of behavior and has been unwilling to address your concerns about it, it may be best to stop corresponding with this guy that you met on an online dating site.

Doing so could get you emotionally entangled with someone who simply isn’t capable of getting into a sustained long-term relationship with anyone.